first, let us know in brief what this game is so, Cyberpunk 2077 is a single-player open-world Role play game with real-time compact and is seen entirely from the first-person perspective. The third-person view is only available while riding motor vehicles or in some rare cutscenes. We will be playing the game as a character called “V”.

“V” can be male or female and is 22 years old in 2077, unlike the character in witcher,”V” is highly customizable. Now the character customization in Cyberpunk 2077 is bit different from other games. You can start from choosing your life path as, A streetkid, A nomad, or a corpo, now each lifepaths leads to a different intro and affects your gameplay through the entire game so choose carefully how you wanna play the game.

after that you will have all kinds of normal character customizations such as body, hair, face, scars, tattoos, etc all the way down to genatals, yes you can customize your character’s genatals too. we will also explain the cyberpunk 2077 cast below.

GTA 5 Voice Actors Behind The Characters

All 40 Fortnite Character Explained All You Need To Know

Cyberpunk 2077 Cast of All Voice Actors

All alright, let us see the Cyberpunk 2077 Cast. here is 189 cast and crew are playing their given roles. we only talk about the top 5 main casts and crew.

Keanu reeves one of the most popular actors, he has a large number of fan following. one of the latest Hollywood superstars to lend his voice, face, and performance to a video game character – says gaming doesn’t need legitimizing. The star plays Johnny Silverhand in Cyberpunk 2077 cast, a futuristic action-adventure game that comes out in 2020.

cherami Leigh is an American film, television, and voice actress. She provides voices for a number of English-language versions of Japanese anime and video games. she gives her voice in cyberpunk 2077 in 2020. her voice is much attractive.

lovensky jean is an actor, he has a credit of 27 filmographies. he gave his voice in-game cyberpunk 2077. he plays the role of placide in this game.

I hope you liked this Cyberpunk 2077 Cast of All Voice Actors, and if you want more updates on the Cyberpunk 2077 game so you can visit this website again. you can also subscribe to this website for more amazing Games Updates. for that you can press the allow button. 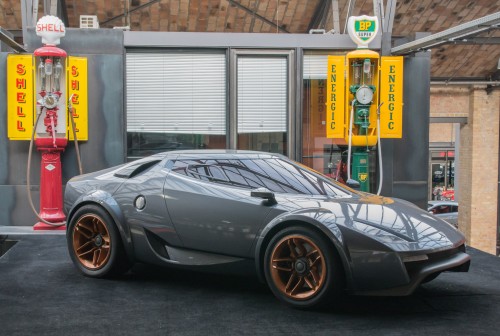 So here comes the question of how to access the garage & how to change the car. How can you switch bikes in cyberpunk 2077? There is no physical place in the game where you can this all.
All you have to do is follow these steps 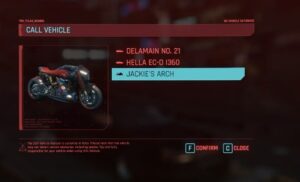 A list will open in front of you, inside it all your owned vehicles will be showing. Pick and confirm whatever vehicle you want. So like this, you can access it in Garage Cyberpunk 2077.

Failing is not an option. Before entering into the subject, I’m not going to repeat the full speech, but you can still enter into the contest to win a Cyberpunk set-valued in more than $500, which includes a copy of Cyberpunk Red signed by Mike Pondsmith link in the description with the information.

And, also, take a look at the book The World of Cyberpunk 2077 edited by Dark Horse, it has some very interesting lore, although no spoilers, and I showed some snippets in a stream the other day, you’ll find a link in the description to see what this book is about in case you’re hesitating if this book is for you or not.

A lot of the information showed here comes from this book, so if you want to expand on the specifics of cars, and cyberwar, and technology, and a lot more things, you’ll find it in The World of Cyberpunk 2077. Now let’s go to cars. History, history is important.

In the late 80s, due to overspending policies, fuel shortage was a great problem, fossil fuels were a limited resource and no one bothered to find alternatives, so this resource was running low very fast.

In the early 90s, an up-and-coming Italian biotechnology company called Biotechnica found the solution: a genetically modified wheat that, thanks to a patented refining system, could create a fuel called CHOOH2 which not only was limitless to create, it burned way cleaner than gasoline and diesel.

Although it’s really toxic, that’s the fun of having drinks with CHOOH2, like the 20s version of the Johnny Silverhand cocktail CHOOH2 in 2077. (Cyberpunk 2077 Car) 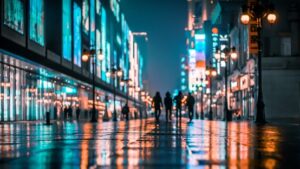 (Cyberpunk 2077 Car) . Biotechnica came with the invention but they were a small company and they couldn’t grow the wheat by themselves, so they sold the exclusive license to the energy giant Petrochem, who back then wasn’t an energy giant anymore because they were in a crisis for the fuel shortages, but when CHOOH2 became the standard fuel for ground vehicles the success of the fuel catapultedBiotechnica and Petrochem. Later this license would be also sold to other14 energy corporations, the eternal rival of Petrochem, SovOil, amongst them. And they lived happily ever after until the4th Corporate War erupted. During the 4th Corporate War, there was a problem with fuel shortages, as ground vehicles used CHOOH2, but air vehicles were fueled by a more complex to manufacture a version of it or with gasoline, and the only 2 remaining providers of petroleum derivates left were the American Petrochem and the NeoSoviet SovOil.

These competing megacorps started to fight for the resources of their competition to be able to provide as much as possible during the war, and started to strike hard the resources of the competition, including attacking the lands where the wheat for the CHOOH2 was grown with a bioengineered virus, this corporate war between Petrochem and SovOil inside the 4th Corporate War kept escalating until turning into what is called the AvGas War. So, when the 4th ended, you had another thing to add to the destruction, as a worldwide war, the destruction of the net, and orbital strikes weren’t enough. Now you need to add the destruction of CHOOH2 crops with a bioengineered virus and much of the petroleum reserves left on the planet squeezed dry by the war effort, and Petrochem and SolvOil destroying refinery infrastructure of their competition. And this caused a fuel crisis. (Cyberpunk 2077 Car) 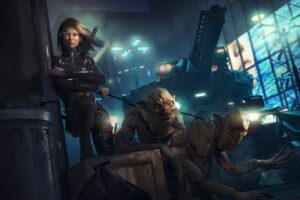 After the 4th, in the Time of the Red, fuel shortages stroke the vehicle industry hard, to a point in some parts of the world AVs were almost completely absent from the skies for almost twenty years. But, obviously, the most brilliant minds of the world weren’t going to quietly wait for a fix and soon researches to create solutions started, and resulted in the invention of numerous unique hybrid systems. Various bio fueled, hydrogen-operated, and electric motors were researched in this period, but none proved to be an ultimate substitution. Not to mention fossil-based fuels also made a comeback in some parts of the world as they became profitable again because they seemed to forget about climate change. In 2041 there were two major breakthroughs: in Europe self-powering electric car engines were created, and in America, Biotechnica came with a new strain of their magical wheat that was immune to plagues, so vehicle production started to resume, and new models of cars and AVs were created, although AVs are still only for rich people and the transportation of goods. (Cyberpunk 2077 Car)

And in Cyberpunk 2077 are not drivable by the player, I’m afraid. We will only be able to drive ground vehicles. Now let’s get to see the cars, shall we? If anybody that knows me in real life would see me hyped for cars they would take my temperature. First of all, let’s talk about the missing feature of car customization. As you know, in Cyberpunk 2077 cars won’t customizable but we will be able to find customized versions of different models of cars. Apparently, the problem with customizable cars is a technical one, because apparently certain Polish developing studio went a little carried away with the number of different models of cars that are going to appear in the game, and as cars are not a copypaste of each other but they all have their unique design, this means that every single mesh of each car is completely different, they didn’t take a 3D mesh, change the textures of it a little and, voilà, you get a new car, no, each car is unique. 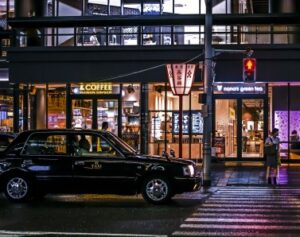 And as there are zillions of different models, because what I’m going to show here is only a very small portion of the thing, creating customization pieces is a titanic task, which solution would be having less different cars in the game, but to be completely honest, I rather more designs and no customization than customization and a copypaste of designs, but that’s a personal preference, becausestyle over substance. Now let’s talk about the manufacturers. The American company Quadra, you know yourQuadra, specialized in muscle vehicles, like the type-66 or the most iconic Turbo R, created as a response to Japanese sports car manufacturers. Their V8 engine became a star instantly inthe mid-50s, and for those of you who don’t know the V8 is a reference to Mad Max, as the Pursuit Special car that Mad Max drives were also a high-performance coupe. Hence the short video on the modified Quadra Type 66 that CD Projekt Red Tweeted on Mad Max’s anniversary. (Cyberpunk 2077 Car)

The Chinese manufacturer Archer is known for its midclass passenger cars, most of which were first released between 2020 and 2050. These cars are on the mid-tier, more or less like a Quadra. Do you want a car? This is how you get a car. But let’s say you want something more stylish. Then the Spanish luxury brand Herrera, who produces glamorous autos with record-setting performance and unparalleled comfort is your choice. Or a top-tier luxury car from Great Britain’s Rayfield which, along with Herrera, are known for their superb quality sports cars and custom-made luxury limousines. If you’re in for an affordable option that may be more comfortable in the blocked Night City traffic, a Yaiba motorbike may be your choice. Yaiba specializes in sport models that are named after legendary weapons from Japanese mythology, and are especially popular among street-racing biker gangs like the Tyger Claws. These bikes are more practical for longer trips between cities since they perform better on the poorly maintained county highways and interstate roads.

But, BUT. If you’re in for a thrill and have what it takes to steal military vehicles, some Nomads did, why don’t you? Then Militech and Arasaka are the leader manufacturers, if you get to steal one of those you most probably don’t want to be seen around using it. And with this and a bizcocho, this is the story of cars in the Cyberpunk universe and a small sample of the cars that we’re going to find in Cyberpunk 2077, hope you like them. I do. And I don’t even like cars. And that’s all the hype I have for you today, If you want to learn all the lore in the Cyberpunk 2077 universe, you’re going to find in the description a playlist that starts with the timeline explained and then 3 videos with the basics of the lore summarized from 1989 to 2077, to then go on with all the subjects in detail, and more lore videos daily. Until I die from a heart attack. If you want to make sure that you ignore my videos by your own initiative and not by YouTube’s initiative, please subscribe, and don’t forget to click the notifications button to be notified of new audiovisual cyberpunk nerdism. I like it, I’m gonna keep it! See you in next videos and stay is amazing.